In my mind, the best Patriots team of all-time was the 2004 Patriots. They may not have been the most talented team, that distinction has yet to be made, but they are the best collection of players New England has every offered. 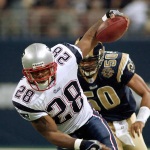 Tom Brady had developed into one of the best passing quarterback’s in the league, but more importantly he had become the best big game chucker since Joe Montana. Corey Dillon got a reprieve from Cincinnati and thanked the Patriots with a franchise record 1635 yards and 12 touchdowns. Dillon complied nine 100-yard games in the regular season and added a 144 yard effort in the playoffs. The teams true calling card, though, was a defense that was absolutely loaded. Richard Seymour led a stout defensive front, and the line backing core consisted of Mike Vrabel, Tedy Bruschi, Willie McGinest and Ted Johnson. Ty Law and Asante Samuel manned the corners with Rodney Harrison and Eugene Wilson cracking anyone who came across the field. Of course they also had the best kicker in the game in Adam Vinatieri.

The season started with a opening night win over the Colts that saw the teams win streak extend to 15 games. The Pats would win 21 straight before a loss on Halloween to Pittsburgh. But, New England would get its revenge. After a second straight 14-2 season New England headed to the playoffs, but were considered by many to be an underdog. The first opponent was the league’s highest scoring offense, the Peyton Manning-led Colts. Manning had thrown a record 49 touchdowns and was the league’s MVP. On a snowy and cold Sunday, the Patriots held Manning to 0 TD’s and 1 INT in a 20-3 win. A sign of the teams depth was the fact that both Seymour and Law missed the game.

The next week the Pats went into Pittsburgh and faced the leagues top-ranked defense. It was like the Pats were toying with their competition. The Pats scored 24 first half points, started by a 60-yard bomb from Brady to Deion Brach and punctuated with Harrison’s 87-yard pick six, en route to a 41-27 win over the 15-1 Steelers.

New England went on to win its third Super Bowl in four years by forcing three turnovers and sacking Donovan McNabb four times. When Harrison locked up the game with his second INT of the night, the Patriots had vaulted themselves in rarified air.

One thought on “50th Anniversary Minute – the 2004 Patriots”