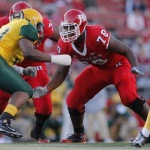 Looking at Kevin Haslam in high school, one had to wonder whether the tall, thin kid from New Jersey would excel in football. State residents were questioning the same thing about Rutgers. Five years later, those questions have been answered, as the offensive lineman has helped the Scarlet Knights become consistent bowl contenders.

Haslam discussed such topics as position versatility, team consistency and sports movies during his in-depth conversation with PD.

(Because you’re) a New Jersey guy, I wanted to start out by talking about Rutgers football, mostly the transformation that you’ve seen happen with the program over the past several years.

When I first got there, it wasn’t really that big of a school to go to, but you know, Coach (Greg) Schiano, I believed in him – that he was a good coach – and he recruited me. And I decided to go to Rutgers. When I first got there, we just got – fans used to rush the field after getting our first bowl-eligible season, after our sixth win, it was like the biggest thing in the world. Now, you know, seeing how we just go to a bowl game every year since then, I mean, I wouldn’t say it’s become lackadaisical where people just expect it, but it’s a good feeling knowing that we built a tradition over the years. Hopefully, it keeps going. It’s just a testament to show what Coach Schiano built up.

In the time that you’ve been there, closer to the beginning of Coach Schiano’s time there, have you seen any changes in the program, just the way he does it?

No, not really. I mean, he’s coached the same since he’s been there. Before, I guess the seasons weren’t as great (compared) to what it is now. Since I’ve been there, in my five-year career, it’s all been the same: he’s got intensity all the time, he’s a very hands-on coach, and, you know, he expects the best out of all his players. And he’s very good.

You’re from Mahwah – you went to Mahwah High School?

And were you heavily recruited out of high school?

I wouldn’t say heavily. I mean, I guess I was an under-the-radar person. That’s what they said back in the day. I think I only had about eight scholarship offers coming out of high school.

And what were some of the schools looking at you?

What hooked you to Rutgers?

That was my last visit and, honestly, that was just a good feel. At first, I did commit to South Florida, then I did change at the last second. I just felt more comfortable at Rutgers, you know, the team’s atmosphere was great, and I wanted to be in New Jersey, with a good program there. It was just a really good feel for me at the time. I do not regret it at all.

What kind of improvements do you think you’ve made as a lineman in your time in college?

Oh, I think I’ve made big strides. Coach (Kyle) Flood, he’s a great coach. I think taking me from a smaller lineman – because, you know, high school, I was only 200 pounds my senior year – taking me from more like a finesse, basketball (type and) converting (me) to an actual college lineman, I think that’s the biggest change. Actually hitting, putting on weight, and just being more aggressive and everything like that. And being a student of the game.

Yeah, it sounds like you really did have to gain weight. How did you do that?

Oh, I just ate. I lifted, I ate constantly, all day long, weight gains, protein shakes, whatever it may be. I reported to camp (at) 290. So, yeah, a lot of weight to put on in a matter of months.

What are some of the differences between the kind of workouts and things you were doing in college and what you’re doing now to get ready for your pro day?

High repetition, I guess, is the biggest difference. College, you want to get bigger, stronger, you know – bulk up and everything. Now, it’s more like, make sure you don’t get fatigued after doing 20 reps of bench or something like that, or, you know, running around, because mostly on pro day you’ll be by yourself running around on drills. So everything is high-speed repetition, high repetition, to make sure you don’t fatigue out, (to) make sure you’re in the best shape of your life. I think that’s the biggest difference between college and right now.

And what events do you think you’re going to really excel in?

I won’t say I’ll really excel at anything. I hope to do well in, mostly, agility drills. It all depends on what day it is, how you feel on pro day, but the short shuttle, the L-cone, I think, are really strong for me. I’m pretty confident in those, so we’ll see what happens.

And when is Rutgers’ pro day?

March 10. Okay, great. What do you do for downtime now, when you’re not working out? Is it the type of thing where you take a break from football, or is it all football, all the time?

Oh, no, I wouldn’t say all football. I rest, because we wake up in the morning early to run, then we go back, then we go to lift. So, I mean, rest, lay down, read a couple – I’ll go over the tests, the Wonderlic-style tests and stuff like that. But mainly, I guess my main thing to do in down time is play Madden. That’s my one big thing. I guess that does count as football. (Laughs.)

(Laughs.) We can count that. Now, I’ve heard that you’re a bit of a movie buff. What are some of your favorite sports movies?

Do you think there’s any movie out there – The Program, for example – that accurately reflects any aspect of college football, or is it just way over the top?

Were you a communications major?

What were some of your favorite classes?

I took one class this past year, Comm Facilitation. I guess the whole purpose of the class was just to let you come up with business proposals for different companies. You basically act like your own boss, and come up with this elaborate proposal at the end of the year… that you would present to a company on how you can better that company, how you can help them out in whatever way possible. I did one on the Rutgers football program. I did it more on team bonding issues and stuff like that, how you can get your teams closer, different activities that you can do.

I’m sorry, what was the name of that class?

(Laughs.) You can just say Comm Facilitation for short.

Okay. You’re not at Rutgers. Did you graduate?

Is this the type of thing where, being from New Jersey, going to a New Jersey school, have you gotten a lot of (publicity) back in Mahwah?

I guess. I speak to my high school coach a lot; he calls me and tells me I’m in the paper. But I really wouldn’t know. I’m not really over there a lot.

What kinds of numbers are you hoping to put up at your pro day?

I mean, I really don’t have a general set (of numbers) right now. Just, like I said, as fast as I can possibly go. So, we’ll see what happens then, but I’m not going to jinx myself now by throwing out stats like that.

Were you a tackle in college?

Yes. Actually, I started every position on the line, except center, in my college career.

Any particular position you think you would focus on in the pros, or are you leaving that wide open?

Yeah, I’m leaving that open. Actually, playing for a full week of practice, after that week, that’s when I get comfortable. I’ve been playing right tackle for a very long time now, so that’s where I’m most comfortable. If you put me at guard, I’ll be comfortable there within a week.

All right. Well, for people who don’t know you or haven’t seen you much, what do you think they should know about you first and foremost?

Hard worker. That’s what I try to be. You know, I was like 290, 295 in college, I wasn’t exactly a big, big guy. I would just try to harp on being athletic for an offensive lineman, you know, being a hard worker.

Now you were in the East West Shrine (Game), is that correct?

How was that experience?

It was great. I loved it. Going out there, just playing with different players – everybody comes from different backgrounds – just seeing how different kids play and how you can work with people who you never worked with before, to see how you can come together. And we won, so obviously we did a good job gelling and everything like that.

Who do you think were some of the better players offensively on the East squad?

Everyone looked good out there. I can’t tell which ones did better than others because I’m usually with the linemen most of the time, so I have no idea who had a good practice week or who didn’t. I didn’t really go back and look at that. And during the game I was in the moment, so I wouldn’t know which offensive players stood out.

Anybody you went against defensively who you remember?

Yeah, they were all very good. I went against Lindsey Witten from UConn, who obviously I played during the season, and Willie Young from NC State, who I actually played against two years ago. But, yeah, those two are really great players. Fast, athletic, and they’re really good. Those are the (main) players I went against throughout the week.

Did any pro teams, NFL scouts, talk to you during that week?

Oh, yeah. All the teams are there, and you talk to nearly all of them, so I can’t really run down the list. But basically, you talk to all of them at a certain point and time.

And you had a great meeting with the Patriots. Is that correct?

Excellent. Kevin, thanks a lot for your time today.

Thank you very much.