Six of the first 11 games played this past Sunday were decided by 28 or more points. The average margin of victory for all of Week 7’s winners was 21.5. The Chargers, Bengals, Colts and Jets each won by 30+. In regard to these major point discrepancies, several noted football talking heads opined that something needed to change, that so many haves versus so many have-nots is unappealing, that the league needs to get closer to the parity of the past several years.

Honestly, what’s happening in the NFL right now is awesome. The best teams are the best and the worst teams are the worst. There is very little middle ground. And what that means is that we’re much more likely to see 14-2 teams play 13-3 teams come playoff time than we are 8-8 teams play 9-7 teams. Which scenario do you prefer?

Last season, after opening 3-4, the Colts won nine in a row and finished 12-4. Their reward was to go on the road in the first round of the playoffs to play the 8-8 Chargers. The reasons for this – the Colts didn’t win their division thanks to the Titans’ 13-3 mark and the Chargers did thanks to the Broncos’ late collapse – is another argument altogether. For our purposes here, the point is that it’s not nearly as interesting to see .500 teams make the postseason (even if the Chargers did beat the Colts in that game last year). I want to see division winner with double digit victories. I want to see wild card teams have to battle with each other for that 10th or 11th win just to make it. If a team that goes 11-5 doesn’t make it, so be it (hello, ’08 Patriots!). But when mediocrity disguised as parity is the reason why, I’m not inclined to care as much.

There are always teams that make it with less than 10 wins. The Cardinals won the pathetic NFC West at 9-7 last year, then went to the Super Bowl. And once the playoffs happen,everyone’s record goes back to 0-0 and a battle of attrition begins. But it seems to me that for the regular season to mean even more than it already does, the teams that do the most damage should be the ones who make it to the postseason, even if such a team manages 14 wins because its schedule requires it to play teams like the Rams, Browns and Bucs . Furthermore, if a team gets fat on those lousy teams, the playoffs are an opportunity to see if it really has what it takes when the garbage is at home or playing golf.

1. New Orleans: Down three touchdowns late in the first half on the road, all the Saints did was score 43 of the next 53 points, including 22 unanswered in the fourth quarter, to beat the shocked Dolphins. Anyone want to argue?

2. Indianapolis: It wasn’t exactly an even matchup for Peyton Manning and the Colts when they traveled to face the Rams, but the great teams are supposed to beat the snot out of the bad ones and winning 42-6 pretty much meets that requirement.

3. Denver: The 6-0 Broncos, who will face likely their sternest test yet this weekend in Baltimore, don’t rank higher than ninth in any major offensive category, but on defense, they are third against the run (79.7YPG), second in total yards allowed (262.5 YPG) and first in points allowed (11 PPG).

4. Minnesota: The Vikings lost but it was at Pittsburgh against the Steelers continually unbelievable defense. Plus, Adrian Peterson absolutely burying Steelers’ DB William Gay on a long, fourth quarter catch and run was such a huge hit, it hurt just to watch it. Amazing stuff.

5. Pittsburgh/New England (tie): Such a bummer these two teams won’t meet during the regular season this year. But the way both are playing right now, flying high into their bye weeks and considering the inconsistent playoff acumens of the teams currently ahead of them in the AFC, a postseason showdown doesn’t seem too far-fetched.

1. Washington: VP of football ops Vinny Cerrato, that genius of team-building and leadership, actually was quoted yesterday as saying he thinks the Redskins are playoff worthy. Obviously, he has not watched a ‘Skins game since 1983, when Joe Theismann, Riggo and a likely coked up Dexter Manley were roaming the RFK Stadium grounds.

2. St. Louis: The poor Rams. Just when it looked like there might be a glimmer of hope following their near miss last week at Jacksonville, the Colts come to town and whip their asses by 437 points. If they don’t beat the Lions this week, other than a possible W in Week 14 at the Titans, they may well go 0-16, which would then give them 26 straight losses.

3. Tennessee: Speaking of the Titans, they move up a spot in the polls just by virtue of us all not having to watch them roll over and quit in the first quarter for a week. By the way, with the Vince Young era, version 2.0 about to begin in Nashville, expect to see these guys on this list pretty much for the rest of the year.

4. Tampa Bay: Racking my brain trying to figure out of there’s ever been a team that’s two top quarterbacks (and I use the term top very loosely) are both named Josh.

5. Oakland/Cleveland (tie): If we gave JaMarcus Russell and Derek Anderson each 100 unchallenged throws to guys standing alone 10-15 yards away, would either of them be able to complete half? I give my vote to Anderson only because he seems like he sort of cares.

– The Bengals Offense: Remember when the Bears defense was good? If the guys playing for it now did at all, they probably forgot after Carson Palmer was 20-of-24 for 233 yards and 5TDs, Cedric Benson rushed for 189 yards and a score and Chad Ochocinco caught 10 passes for 118 yards and two touchdowns in Cincy’s 45-10 drubbing of Chicago.

– Alex Smith, 49ers: The former No. 1 overall pick, who was made the backup the past two years to dudes named J.T. O’Sullivan and Shaun Hill, came off the bench to throw three second half TDs in nearly leading a great comeback at Houston. It was more touchdowns than he’s had since ’06 and now, he’s the San Francisco starter once more.

– Miles Austin/DeMarcus Ware, Cowboys: Austin, out of that renowned wide receiver breeding ground Monmouth University, has 16 catches for 421 yards and fourTDs in his last two games while Ware, who had 20 sacks last season and has four so far this year, signed a six-year, $78 million contract extension which includes $40 million up front.

– The Giants: Two weeks ago, they were No. 1 in our top teams poll. Then they gave up 78 points in their next two games and are again starting to resemble the team that flamed out in the ’08 season’s last month.

– John Fox, Panthers: Not sure I’ve ever seen a coach try so hard to get fired. Last week at home, Panthers QB Jake Delhomme threw three more picks, giving him 17 in his last eight games, and Carolina lost to the Bills despite outgaining them by almost 3-1. So naturally, Fox announced he’s keeping Delhomme as his starter because he gives the Panthers “the best chance to win.” He also gives Fox the best chance of being unemployed.

– The Browns: Not to pile on, but what the hell. Cleveland has been held without a single TD in four of its seven games so far this year. I wonder how many martinis owner Randy Lerner had thrown back when he gave Eric Mangini the keys to the car last winter? 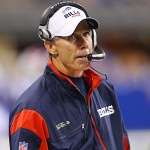 We’ll end this week with a tip of the cap to Bills coach Dick Jauron. I had a chance to do a feature story on Jauron, a native of Swampscott, Mass., a few years ago when he became the head man in Buffalo and came away thinking that even though the Bills were long-time rivals of my favorite team, it would be hard to root against him nonetheless.

Jauron has been dealt a tough hand in Buffalo, playing twice a year against teams that have far more resources in much bigger markets. His personnel people haven’t exactly done him a lot of favors, from the drafting of the awful J.P.Losman at QB a few years ago to the ridiculous signing of Terrell Owens this past offseason. After failing to make the playoffs last year on the heels of a 6-2 start, the pressure rose for Jauron and when he fired his offensive coordinator on the eve of the season, it didn’t exactly look good. After playing a very competitive game against the Pats on opening night (a game they should have won), the Bills floundered, bottoming out with a 6-3 home loss to the pathetic Browns a few weeks ago in which Cleveland quarterback Derek Anderson completed just two passes yet won anyway.

But since then, there’s been some life, first in a road win against the Jets then another victory on the road against Carolina. The Bills have won these two games mostly with defense -Jauron’s specialty -allowing just 28 points over their last three games with 10 interceptions, four by rookie Jairus Byrd in the two wins. They’ve also done this with Harvard product Ryan Fitzpatrick, who replaced injured starter Trent Edwards, at quarterback.

The Bills probably aren’t going to make the playoffs and likely will be pushed around on offense as long as Fitzpatrick is in there. But the fact that they didn’t roll over at 1-4 given all of the negatives that have been swirling around them since the mid-point of last year is a testament to Jauron, a good guy in a fairly lousy situation.