The Patriots see their last division game come this Sunday in their second match up with Buffalo, who they saw in the opener. Once again, it would seem to make sense for the Patriots to pound it on offense. These Bills are very injured and banged up on defense and essentially are at least in nickel as a base defense most of the time. They are last in the NFL in rush defense and giving up 5.0 yards per carry, which is an unheard of high number in the NFL. In contrast, against the pass the Bills are effective, can rush the passer a bit and have an outstanding 10 to 25 touchdown to interception ratio by opposing quarterbacks. It’ll be bewildering if the Patriots, who ran more than usual last week, don’t show even more a commitment to that in the cold and blustery December Buffalo weather against a team that is simply pitiful against the run.

On offense the Bills will try to play conservative with an occasional long ball to Terrell Owens and Lee Evans. They’re gonna try to win this game 16-13. The Patriots simply can’t give up big plays and if they don’t, Buffalo will have a very hard time moving the ball consistently.

Lets take a look at some Bills who figure into this game: 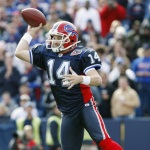 A Harvard grad, Fitzpatrick has essentially taken over as Buffalo’s starting quarterback. The fact is Fitzpatrick is a smart quarterback with a very strong arm but simply lacks the accuracy to ever be a regular starting quarterback. He can do a competent job filling in and even occasionally make some excellent throws and plays, but he just hasn’t shown an ability to do it consistently. Fitzpatrick was formerly a 7th round choice with St. Louis who is now with his 3rd NFL team. For the year, Fitzpatrick has played in 8 games and 5 times he has had a QB rating of less than 70. He has thrown 5 touchdowns and 9 interceptions. His QB rating for the season is 60.2. One of the good things you can say, however, is the Bills are 3-3 in games he started, 2-5 in games he hasn’t. He can scramble a bit, so that is something the Patriots will have to look out for.

Simmons was with the Patriots earlier this season having signed with them on September 6, 2009. He played in one game when he was, reportedly reluctantly, released when the Patriots needed to make room on the roster to account for injuries at other positions. Simmons then signed with Buffalo on November 24th and started 5 days later in a win versus Miami. He has started all 3 games at guard since joining the Bills. In fact, in 81 career NFL games the only one he has not started was the one game he played for the Patriots this year, a 59-0 win for New England. Simmons won two Super Bowls with Pittsburgh during the 2005 season and last season, though he was on injured reserve for the game last year.

Tight End Jonathan Stupar, who went to college at Virginia, originally signed after graduation with the Patriots in May of 2008. After being waived at the end of training camp last year by the Pats, he hooked on with the Bills practice squad and was activated to the regular roster towards the end of last year. He showed some promise this preseason as both a blocker and a pass catcher, leading the Bills in receiving their first 3 exhibition games. Now on the Bills regular roster, he is showing potential there as well having caught a pass in each of the last three games, two of which were wins. Stupar is the nephew of former Giants Super Bowl winning quarterback Jeff Hostetler and the son of a former Penn State offensive lineman. He has a brother who is a linebacker with Penn State now.

Scott, normally a safety throughout his college and NFL career, is playing linebacker for the Bills at the moment. The Bills are essentially playing a base 4-2-5 defense with Scott in the starting lineup and that is a major reason why they have been very good defensively versus the pass, but horrendous against the run. The way-undersized Scott (for linebacker) simply isn’t equipped to effectively play the run. Combine that with the undersized Bills at other defensive positions and they are the most inviting team in the NFL to try and manhandle.

Fewell took over the team this season when Dick Jauron was fired on November 17, 2009. He has gotten the 3-6 team he took over to go 2-2 under him with every game being competitive (the losses were by 3 and 6 points). Fewell is 47 years old and has done a good job in the NFL as an assistant coach, sometimes with limited talent to work with. This week Fewell recalled meeting Bill Belichick for the first time in 1997 when Belichick was there scouting Corey Chavous. “I’ve always admired him, studied some of the things he’s done throughout his career. We’ve never worked together or coached together, but in your coaching career you look at people and like some of the things they do and you try to emulate those things” said Fewell this week. He’ll get a chance this Sunday to have the thrill of his so-far short head coaching career by topping Belichick’s team.