Being of such sunny disposition here at PD, we find it difficult to assign our notorious lap to any one player after a division win. Still, the lap waits for no one and must go to Tom Brady this week. 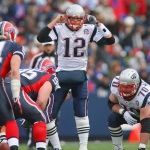 Brady completed two notable passes, firing a touchdown to Randy Moss (here’s the clip) and converting a third-and-long to Wes Welker to seal the game. Overall, he went 11 for 23, with an early interception that killed New England’s first drive (clip here). On the play, he missed Welker across the middle and failed to account for linebacker Paul Posluszny. This pass followed a first and 10 bomb to Moss which Brady threw incomplete into double coverage.

Brady also failed to connect with Sam Aiken on a couple of deep balls and threw short passes to Welker that had better odds of getting caught by groundhogs. Though the QB felt some pressure from Buffalo’s rush, they failed to sack him, and throughout the day he appeared to have enough time to follow through on his throws.

As Brady goes, so goes New England. We can say that his decisions goaded Buffalo into committing pass interference penalties that won the game, but the Patriots can no longer depend on other team’s mistakes to win. Mr. Brady, it’s time to step up. For this week’s performance, and with the hope of improvements to come, we ask that you take a lap.