The Patriots come into Sunday’s final regular season home game with a chance to reach their first goal, wining the AFC East. A victory assures that goal will be accomplished for the Patriots. Their chances look good, as they’ve yet to lose at home. Standing in the way are the Jacksonville Jaguars whose own playoff chances are remote. What chances they did have were probably blown last week with a late David Garrard interception against their division rivals, the Colts, at home in a 35-31 loss.

Look for the Patriots to throw the ball here some as Jacksonville is the worst team in the league rushing the passer and do not cover that well either. The Patriots will mix in some runs against a good Jaguar run defense, but this could be a game that gets Tom Brady going again and his first big game in some time.

And in the end the Patriots, with a flawed, younger team, may just walk out of yet another “hat and t-shirt game” victorious and wearing same proclaiming “2009 AFC East Champions.” And that will be one high point in what has otherwise been somewhat of a disappointing year. It also should serve as a reminder the year is not over and nothing has been decided as of yet.

Perhaps more hats and t-shirts are to come? 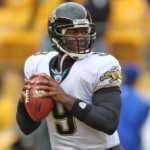 Garrard is a decent QB who may have had one of his better years throwing the ball. He’s gotten more accurate as his career has gone along and is completing 60% of his passes this year. He generally avoids big interceptions and has never really turned it over a lot throwing. He does have a tendancy to fumble, however, and has fumbled an incredibly high 13 times this year, losing it to the opponent 8 times. He throws well on the move and is strong at 245 lbs., but he’s been sacked 37 times so far this season. Occasionally, Garrard will take off and run and is dangerous in that aspect. It seems one thing Garrard has never done well is play effectively down the stretch against good teams. He has had a tendancy to play smart, keep a game close and then make a killer mistake against a good team late to kill the Jags chances. It happened just last week versus the Colts. Garrard has never beaten the Patriots as Jacksonville has lost all three games he’s appeared in against them.

Jones is a fun player to watch. A mere 5’7″ he is strong as an ox and bounces off and runs through defenders regularly. The rest of the time he is elusive and fast and easy to lose track of on defense. This season Jones-Drew has taken his game to the next level, surpassing 1,000 yards rushing for the first time while maintaining effectiveness in the passing game. Despite his stature, he is good around the goal line and has pounded in 15 touchdowns this year. Jones-Drew has hit the 100 yard rushing mark in a game 5 times this year with 97 in another game. The Patriots did a good job against him in the running game in the 2007 playoff game against the Jaguars, holding him to 19 yards rushing. But in 2006, his rookie year, Jones-Drew ripped them up for 131 yards rushing and 2 touchdowns on the ground. Jones-Drew was born Maurice Drew but was raised by his grandparents. When his grandfather, Maurice Jones, passed away from a heart attack while the younger Maurice was at UCLA, the name was changed to Jones-Drew to honor the grandfather.

One of the stories of this game will be how well the Patriots can take advantage of Jacksonville’s two bookend rookie tackles. Monroe was the Jags first round choice in this past draft while Britton was the team’s second round choice. Reportedly the Patriots had a lot of interest in Britton prior to the draft. Monroe attended Virginia and was taken with the 8th pick in the draft. He’s started 11 of 13 games and played pretty well. He has an excellent future in the NFL, but still occasionally is prone to get overwhelmed by experienced defensive linemen or complicated defensive schemes. He was benched at one point due to a drop in play, but since is starting again and playing better. Britton has started all 12 games he’s played in. He’s pretty athletic but could use getting a bit stronger. He has held up okay this season and played decently, the upside is there, but look for the Patriots to dominate him if all their defensive linemen are healthy.

Henderson is a massive 6’7″ 335 lb. inside presence who helps the Jaguars stop the run. And they have done so pretty effectively this year, limiting opponents to 103 yards per game and a mere 3.9 per carry. A 2-time Pro Bowler, Henderson is actually one of the Jaguars more effective pass rushers too. He’s gotten to the QB 3 times from the inside on a team that ranks last in the NFL in sacks with a mere 14 for the year. Henderson has been extremely durable for the Jaguars, missing only 3 games in his 8 year career.

One of the reasons the Jaguars have been very inconsistent in pass coverage is the play of Nelson, which has to be considered disappointing. Nelson, their former first round choice, has all the tools and is supremely talented. But his reactions at times are slow and he misses tackles trying for the big “Sportscenter” hit sometimes. He has flashes, but like the rest of the Jags secondary, to many lapses. Look for the Patriots to throw on Sunday and take advantage of a secondary that at times seems out of sync.