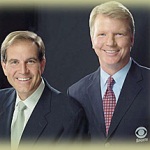 CBS had a conference call today in anticipation of this weekend’s playoff games. Top analyst Phil Simms had the following to say about this Sunday’s Patriots/Ravens game which he will call along with play-by-play man Jim Nantz:

(On New England losing Wes Welker because of injury): The big thing is that New England can’t reinvent itself. They have two receivers they’ve thrown to all year, Wes Welker and Randy Moss. I don’t see how they can change in one week. So Julian Edelman is going to have to take the place of Wes Welker and he’s going to have to be relied on just like they would on Wes Welker. They’ll put the same plays in, they’ll expect him to step in and get it done. I think he’s up to it. If Baltimore thinks he is not, they’re making a big mistake. You can see their offense is creative. They have a lot of ways to get that position open. Regardless of who’s playing it, you have to focus on it. I can’t wait to see that.

(On Joe Flacco in playoffs after now in his second NFL season): Joe Flacco has not had the second year “sophomore slump” — none of that. Overall he’s played very well. He’s the hitter who might be hitting .250, but you never know when he’s going to hit one out of the park. So that’s what scares you and you have to always be alert. He has a big arm and can make the big throws down the field that wins games. And you always have to be conscious of that and protect against it. He’s had a very, very good second year. Baltimore hit the jackpot when they drafted him.

(On Tom Brady): I heard a famous morning show guy saying that Tom Brady doesn’t look the same. The Tom Brady I watch is sharp, takes advantage of opportunities when they’re there, and is playing very well. So if he’s hurt, I don’t know. Does it matter? I only judge what I see on the field and Tom Brady is holding his end up.