When you get spoiled watching a dynasty, even a year-long absence can seem like a long time to go not watching your favorite team in the playoffs. And after sitting out last year’s post-season action, that how it feels with the Patriots. A long time. But the playoffs return and everything is ratcheted up a notch Sunday. Most close Patriots observers feel this team is too flawed to make a serious run, though I’d say the majority feel they’ll at least win Sunday.

We’ll see. The Patriots could certainly win Sunday but if they play inconsistently, as they have most of the year, they won’t. If they play like they did against Jacksonville two weeks ago, they’ll win with ease and suddenly you’ll start to hear “watch out for the Patriots” talk. That is how things can change from week to week.

History would suggest the Patriots will win with ease Sunday. Even in the Belichick years they haven’t secured first round byes, and ultimately been unsuccessful winning it all, i.e. 2005 and 2006, they still had fairly dominating first round game at home and won both by three+ touchdowns. It says here they’ll do it again, play a very good game and get by Baltimore fairly handily. Then it’ll come down to week two of the playoffs when they’ll need a great performance. They pull off two weeks of performances like that in a row and all bets are off. As Kevin Garnett would say “ANYTHING IS POSSIBLE!!!! They’ll need to start with the first one first, Sunday in Foxboro. Then we’ll see. 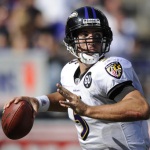 When we last saw Flacco in week 4, it was said here he was in the process of becoming one of the better quarterbacks in the NFL. But something happened on the way to being a game changer, at least this year, i.e., it just didn’t happen. Maybe it was unfair of anyone to expect that. But it seems the conventional wisdom on Flacco has gone from rookie bound to make critical mistakes to….hmmm, he managed the game effectively all the way to the playoffs to……wow, this guy is gonna be a star to……wow, he is overrated. As usual, the truth is probably in the middle. He is, after all, a second year guy whose major experience in college came in at a lower level than Division I. And he did have a decent year, helping the Ravens for an AFC 4th best 391 points. His QB rating was 88.9, not bad and up 8 points over his rookie year. So he is headed in the right direction. Just don’t expect him yet to be perfect. And he will be heading into this road playoff game this Sunday with a 50.8 QB rating in the playoffs from last year. Whether he is still shaky in the playoffs should be interesting.

Rice is now the single biggest threat in the Ravens offense. The 2nd year back ripped off 1,339 yards this year on the ground for a 5.3 average. But he is a dual threat, catching 78 balls for another 702 yards in the passing game. Against the Patriots earlier this year Rice had one of four 100 yard games he had on the season, gaining 103 in a game that included a 50 yard run. Patriot defensive end Ty Warren, in one of the more ridiculous comments I have heard a Patriots player make in recent years, downplayed Rice’s performance and that run specifically because it came out a spread formation against sub packages. As if that matters. The score was 24-14 when Rice made the run. It was still the third quarter. They scored on the drive the run came on to make the game 24-21. What difference does it make if it came out of the spread? The Patriots didn’t stop him. It seemed as ridiculous to me as the Jets players whining about the wildcat after they lost to the Dolphins earlier this year. In any event, if the Patriots don’t do a better job against Rice this time they just may lose the game.

At one time, when Mason signed with Baltimore from Tennessee, it was the Patriots who almost acquired his services. Reportedly it was a very close decision by Mason back in 2005 to pick Baltimore over New England. Since that time, Mason has played in all 80 regular season games, despite often feigning near crippling injuries on the field, and racked up 4 1,000 yard seasons in 5 years including this season. Mason isn’t the fastest receiver in the world, but he is smart, runs good routes, has great hands and is physical. He burned the Patriots for a touchdown in their last match up.

Ray will surely be a prime force in the television build up to the game. The future Hall of Famer I am sure will somehow, reluctantly of course, find himself in front of a camera just before kickoff firing up his Ravens teammates. It is just amazing how the cameras manage to find Ray, isn’t it? Now 34 years old, Lewis isn’t nearly the player he once was. But he’s still good. 133 tackles, 3 sacks, 7 passes defended and 2 forced fumbles shows he gets himself in on a lot of plays still. I have always thought the Patriots have handled him fairly well over the years, but he still definitely shows up here and there in plays. Hopefully for the Patriots, it won’t be game-changing type plays.

The Ravens are a bit weak at corner and these two guys, mediocre players both, are their two starters. A free agent with the Ravens this year, Foxworth started his first full season this year. He had a decent year, but not spectacular. He picked off 4 passes and is somewhere around middle of the pack as a corner. He did win Defensive Player of the Week honors in Week 15 when he picked off two Jay Cutler passes in a game against Chicago. He had a poor game earlier this year versus New England, however. Carr was always known more as a returner and he is certainly dangerous with the ball once he gets it in his hands. Signed to be a nickel back, Carr has now been pressed into starting duty. The results have been so-so at best. This is a crew the Patriots can definitely exploit, even without Wes Welker. The backups are fairly weak as well. The saving grace for the Ravens is their solid safety play, led by All-Pro Ed Reed. But if the Patriots can design ways to get the corners isolated, they’ll take advantage. Tom Brady identifying one on one coverage effectively, which he usually does, will go along way to not allow the Ravens to hide their weak corners.

One thought on “First Impressions – Ravens at Patriots, Wildcard Weekend”