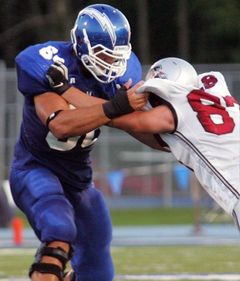 If it’s true that a small school player trying to reach the NFL has to make a big impression, Jared Veldheer’s off to a great start. The 6-foot-8, 312-pound tackle from Hillsdale College in Michigan stood out at the NFL combine, ranking in the top tier for offensive linemen in six events, including a 5.09-second 40-yard dash.

Veldheer took some time away from workouts and classes to talk with PD about his combine experience and future in the NFL.

Let’s start out with the question I’m sure you’re getting tired of: Why Hillsdale?

Well, I was getting recruited by some of the larger, Division I schools, where I went to some of their camps during the summer. You know, I came out of a Wing-T system in high school where I had no idea how to pass (protect), and, you know, the kick-slide was foreign. So I was just trying to rely on my basketball skills, and I fell down the teams’ radar from there. Come the winter, no one was really calling any more, and that’s when the D-II’s starting heating up. My brother graduated from Hillsdale College, played basketball here. And it’s a great school, great education, and great fit for me.

And what other schools were you looking at?

There was Purdue, Michigan State, Notre Dame, Western Michigan. Those were all some of the schools that were recruiting me early, that really lost interest there.

And why do you think they lost interest? Just because of the offense that you ran in high school?

Yeah, that, and I was nowhere near as strong and as athletic as I am now.

I was probably almost 6-7. I grew about two inches in college.

About how much did you weigh back then?

So, going from someone interested in football and basketball, being 6-8, was basketball ever an option, or did you start focusing on football pretty early?

Well, I loved playing basketball all throughout elementary school, middle school and high school, but as soon as college hit, you know, that really kind of died down, and football really took the forefront there. And, you know, it’s just been a growing love ever since I got to Hillsdale.

Your athleticism has really been publicized, especially after the combine. Were you pleased with your performance at the combine?

Yeah, I was. I would have liked to run a little faster in the 40; I feel like I could get that time down and I think I might do it again at my pro day, but as far as the other times there, I felt like I did well. You know, I stumbled – slipped a little on the second turn on the 20-yard shuttle and still had the best time for linemen, so…

Have you always had quick feet, or is that something that you’ve developed over the last few years?

What do you think you need to work on now, before an NFL camp?

Well, I want to keep getting stronger, keep getting faster. I want to work some stuff with hand-eye coordination, keep getting that better so I can work at better hand punch, hand replacement, once I get into the camp. Just keep working hard, that’s the main thing.

And where did you play on the line at Hillsdale?

I played all four years at left tackle.

Has anyone spoken to you about any particular position change?

You know, there are some guys that are thinking right, some that haven’t decided anything. So it hasn’t been a huge deal. It hasn’t been like I’ve met with every team and they’re all, like, “You’re a right tackle, that’s what you are.” It hasn’t been like that. But I definitely feel, looking at combine training, we were working on our skill stuff, I was working reps on both left and right side.

Do you feel more comfortable on either side, or is it about equal?

It’s – I mean, obviously after playing five years on the left side, it feels a little more natural, but the right definitely doesn’t feel too foreign.

Coming from a smaller school, was there anything at the combine – any of the meetings, any experiences that you had – that (was) intimidating at all?

Oh, no. You know, everything went really well. I thought the interviews went well. Just like you said, you probably have to explain a few times, go through a few times about, “Why Hillsdale?” But it’s a really easy answer to explain. You know, you have to think through things, and I’m good at drawing up X’s and O’s. I’m not a guy that walks into a situation like that and gets intimidated. Everyone at the combine was looking for a spot to play in the NFL. No one was a college football player anymore, so Division I, Division II, it didn’t matter. It didn’t matter to me, being in that room. We were guys just wanting to get to that next level.

About how many teams do you think you met with?

Oh, I met with pretty much every team. I can’t think of any team that I did not meet with.

Do you remember your meeting with the Patriots? I’ve got to ask.

And how did that go?

You don’t have to get into specifics if you don’t want to, but what were the types of things that you guys talked about?

You know, it was kind of X’s and O’s stuff, some basic interview stuff. But then we started busting out the paper a little bit and (drawing up) some plays. A common theme of the weekend was, “What’s your favorite run or your favorite pass play?” And you diagram that up, and then you get some hypothetical looks from the defense, and you would have to say how you adjust to them, what your calls would be, do you make the calls? That kind of stuff.

Now, was that similar to most of your meetings?

Yeah, that was definitely a common trend among all the meetings.

Do you think you have a lot to learn, coming from a smaller school, or do you think your offense was varied enough to (prepare you for) the pros?

Yeah, I’m sure I’ve got a lot to learn still, but there was really a lot of stuff going on in our offense. It had a ton of variety to it. You know, Hillsdale’s a great academic school, so all the guys on our team were very smart guys, so we were able to have a pretty deep playbook.

If you were scouting against you, what do you think you would look for as, let’s say, a pass-rushing end?

So if I were a D-end, what would I be looking to do versus myself?

Well, definitely not trying to just use speed, because I can pick that up pretty easily. I’d try to work that up-the-field angle… just because that’s tough for any lineman to pick up. You know, the more double and triple moves you have, the more you’ve got to make the lineman honest. So as long as you’re coming in with a bunch of moves, that’s going to be to your advantage.

Along those lines, has anyone seen your height as a disadvantage?

Oh, no. No one’s said that. The only thing that they keep telling you is that you can’t bend at the waist, you’ve got to bend at the knee.

At what point in college did you start looking around and thinking to yourself that you had a good shot to play professionally?

Probably after my sophomore year.

Anything in particular happen then? Was it just your personal, physical development, or you think your overall development as a player?

You know, it was physical development, but it was also on-the-field development. And with that, I started getting some preseason All-American accolades my junior year. Like I said, (with) all the physical development, times were getting better, all the weight room numbers were improving, as well as my weight was going up. But I was still maintaining if not getting faster in all my times. So, I definitely have to say that was the time that I realized that it was definitely an option, that it was definitely doable.

Now, in terms of working out, what do you plan on doing until the draft?

I plan on being back at Hillsdale. I have a workout program that the trainer sent me from D1 Sports in Nashville, where I was working out before the combine. So I’ll be working out here, and I have to finish my thesis for my biology major.

And will you graduate this spring?

Well, as the new recruiter for Hillsdale, what would you say to anybody thinking about attending and playing football there?

Absolutely a great school. Great guys on the team. I don’t think you can go anywhere else and have as great a team camaraderie as you have at Hillsdale, and the coaching staff is absolutely great. They all know their stuff, they know how to treat players. They’re very smart. They have you well-prepared for the games, and they get the absolute best out of every player.

Jared, I really appreciate your time today. Thanks a lot.

One thought on “Q&A With Hillsdale OT Jared Veldheer”