Another division leader on the schedule for the Patriots. If only the Bears were quarterbacked by a guy prone to boneheaded interceptions. That would be just the type of guy the Patriots newly ballhawking defense would light up.

Italian style beef is a Chicago area favorite. It’s not from Italy. It’s a regional version of a French Dip sandwich .. which of course isn’t from in France.

Take a beef roast and slow cook it over beef broth, oregano and Italian spices. Maybe some red chili flakes. Dip the rolls in the same cooking liquid and top the whole thing with spicy oil marinated vegetables. And that is the Italian Beef sandwich.

8 sub rolls, the chewier the better

Combine the rub ingredients and use it to cover the roast. You’ll use about 3/4 of the rub.

In an oven:
Preheat to 400 degrees
Combine the stock and the leftover rub and pour into a pan larger than the roast. A 9×9 may be large enough, but you’ll probably need a 9×13. You don’t want to use too large a pan or there will be too much surface area and the stock will completely evaporate.

Place a rack directly on top of the pan and place the roast on the rack.

If you have a roasting pan with a built in rack, like for roasting a turkey, you could use that instead. But you will have to increase the amount of cooking liquid you make and put into the pan, at least by half.

Cook for 90 minutes for medium-rare, about 2 hours for medium. The meat will go through a second cooking step when it is dipped in the hot cooking liquid. So do not overcook it on the initial roast.
It is best to cook it to medium-rare.

Cool the roast in the fridge for at least 2 hours, the longer the better. This allows you to slice the meat thinly.

This is also a good meal to make in a crockpot. In that case you’d cook on high for 4 to 6 hours. The roast will take on more of a pulled consistency instead of sliced. The meat will also pick up more flavor from the stock because it will be cooking directly in it. So in this case use a low sodium stock.

Even if you’re cooking the roast in the oven. A crockpot is useful for keeping the cooking liquid in after roasting as the roast chills.

Dip the split rolls into the cooking stock, dip the roast beef into the stock and layer it onto the rolls.

The English IPA is the original IPA and it’s a more restrained beer than it’s American cousin.

They’ll tend to be a little darker, and more malty. Both as a result of the British malts used compared to American malts in a typical American IPA.

Some English IPAs will use American hops, and this is a traditional choice. In the 1800s when the style was first being brewed and shipped to India some British brewers were importing American hops.

Most commonly however they will use British hops such as Goldings and Fuggles. These give more of a floral, earthy, grassy and spicy perception contrasted to the citrus and pine of the typical American
IPA hops.

The bitterness will also usually be kept to a lower level. While still a bitter beer, English IPAs have more balance than American beers.

The style has undergone many changes over the centuries it has been brewed. Originally it would have been around 7-8% ABV and very well attenuated.

Attenuation being the degree the fermentable sugars in the beer have been converted to alcohol. The ABV of the original IPAs wasn’t particularly strong for their day, however the degree of attenuation was high.

When a beer is highly attenuated there are less sugars present for spoilage organisms to feed upon. This made the IPA well suited to travel.

Eventually IPAs began to be sold in England and not just sent for export. At that time they were reduced in strength to the 5% range, again closer to the average strength of British Beer before WW1. Some breweries continued to water down their beer until they bore little resemblance to IPA despite having the name.

There are British breweries making their IPAs resemble the orignals. These are fairly rare. Most are made to the 5% range or the weak range.

The IPA will serve as a good contrast to the Italian Beef sandwich. Cutting through the fat and strong flavors without overwhelming it or being overwhelmed itself. 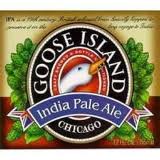 is a good example of the English IPA style.  5.9% ABV, 55 bitterness units, made with a combination of British style and American hops. Goose Island has been available in New England for about a year, and that availability is likely to increase as Redhook will start brewing the Goose Island beers in 2011.

A bigger example, closer to the original beers sent to India is Brooklyn East India Pale Ale. 6.8% ABV made with British malts and British and American hops.

Boulder Cold Hop Ale is a seasonal product and it’s only made through October, but you may still be able to find it in some stores. 6.8% and a bit different due to it’s use of Continental European hops and other hops derived from European ones.

Berkshire Lost Sailor IPA is 5.5% ABV, and hopped with Goldings hops to 40 IBU. With an overall ABV and IBU closer to most American Pale Ales than American IPAs this one is very close to those made in England by Fullers and Sam Smith.

Fullers IPA is made by Fuller, Smith and Turner in England, but only for export. It’s 5% ABV. It cannot be found on their website, but the site is still thirst inducing.

Samuel Smith’s India Ale is also 5% and is much easier to find than Fuller’s. Try this one next to an American styled IPA and the differences are easy to notice.

Sherwood Forest Sheriff’s IPA is around 5% with a mild flavor and aroma.

Trinity IPA 7% ABV and in the original strength category. This beer was originally developed at the brewpub in Providence and was the first beer they released in bottles.

Arcadia IPA 5.9% and 40 IBUs, dry hopped with the American hop Columbus. Columbus is also known as Tomahawk and Zeus depending on which hop producer they come from – each having a different trademark. It’s one of the newer high alpha acid hops. It has a British type flavor being spicy and earthy opposed to the citrus and pine common to American hops.

Mayflower Pale Ale is labeled as a Pale Ale and it is well labeled in America. In England however this would fit right in with their IPAs. It’s hop profile of East Kent Goldings, 4.9% ABV and 40 IBU make
it very close to what IPAs have become in England.

Compare the Mayflower Pale Ale to Greene King IPA, one of the largest selling IPAs in England. The Greene King is only 3.6% ABV with IBUs around 30. Easily only one half the strength and bitterness of the original IPAs. Note, the export version sent to the US is 5% ABV just like the Fullers and Sam Smiths.

Butcombe Brunel IPA OK, you can’t get this beer in the US, but I couldn’t resist including a Butcombe.