Could it be? An ending to what seemed like the longest off-season in pro sports history. As the lockout nears its end, fans can finally be optimistic there will be football in 2011. No longer will we be huddling by our TV’s hoping to get a view of Roger Goodell walking out of the courtroom. Now that both sides have agreed on the most pressing terms, barring any major setbacks, a deal will be done by the end of the week. This means the start of training camp is right around the corner and it’s time to weed out the younger players on the current roster and find the true gems, superstar talents that may or may not have seen much time on the field. Now it doesn’t take some snot nosed kid like me to tell you that Devin McCourty or Jerod Mayo will be future stars because to be frank, they already are. The focus of this article will be the players who haven’t seen a lot of time on the field. Players who were just drafted, backups, members of last year’s practice squad or just flat out under appreciated.

So without further ado (drumroll please), the Future Stars of the New England Patriots…

This first one is a longshot, but hey, you can’t win a game without throwing it deep, am I right? Buddy Farnham is a hometown kid from the Boston area, But it is far from local bias that puts this kid on my list. The star wideout from Brown University has the right skill set to fit right in with the rest of this young wide receiving core. Farnham graduated Brown after accumulating 229 catches for 2,895 yards, both stats reside in the top ten all time list for the Ivy League for their respective categories.

Judging by the injury history of current starters, Wes Welker and Deion Branch, it can be assumed that their 30’s will not emulate the great Jerry Rice. With this in mind, this year’s receiving core is going to look to its younger players to step up and play big roles soon. Brandon Tate has already proved he can be a big time player but who else will step up? Taylor Price? Julian Edelman? While I do like both receivers, look for Buddy Farnham to swoop in and get some time as a fourth option in this receiving core. He will be looking at some serious time when Deion Branch goes down. And yes he will go down, let’s be honest here the chances of Deion Branch lasting an entire season without getting hurt are about as slim as me getting a date with Mila Kunis (I may not be a marine but I can at least borrow some fatigues from a friend of mine, she’ll never know the difference.) Give Farnham a few more seasons with the Patriots and this local legend may one day become a star wideout for the boys in blue. If nothing else, look for Farnham to at least be a speedy special teams option until a spot opens on the offense. 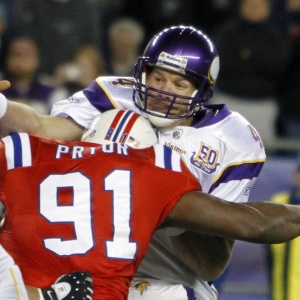 This was a hard decision to make for many reasons. With an abundance of Nose Tackles on this team, it was hard to pick second best. Vince Wilfork will be the starter for as long as possible but as much as Brett Favre would beg to differ, even the best players cannot play forever. It will be hard to replace one of the best nose tackles in NFL history but look for Myron Pryor to fill Wilfork’s gigantic shoes. Ron Brace and Marcus Stroud are the other big names at the nose tackle position. Brace is a young bruiser whose size resembles Wilfork but he lacks speed and his injury history is an immediate red flag. Stroud, an aging veteran, will likely provide more impact off the field than on. This leaves Myron Pryor, an absolute physical specimen that cannot be ignored by this Patriots organization. It’s hard to call a 6’1” 310 lbs. defensive lineman small especially coming from someone like me (5’11” 165 lbs. soaking wet) but that’s exactly what Pryor is.

Pryor will prove to be an excellent compliment to Vince Wilfork’s size and strength with his uncanny speed and agility. He ran a lightning fast 5.05 40-yard dash at the NFL combine and has already shown his worth at the pro level recording 32 tackles in 22 games between the 2009 and 2010 seasons. Look for him to surpass both Ron Brace and Marcus Stroud on the depth chart to become the second string nose tackle and to one day step up and be the next great nose tackle.

Jermaine Cunningham never got the attention he deserved playing opposite Carl0s Dunlap at Florida. In fact, Cunningham has continued to fly under the radar by quietly putting up an excellent rookie season for the Patriots.  As a rookie, Cunningham started 11 of 16 games finishing with 27 tackles, one sack, and two forced fumbles.

Despite being undersized, Cunningham is a quick defensive end with the ability to play linebacker if needed. He can explode from the three point stance, allowing him to be an excellent pass rusher that finds a way to the quarterback with ease. Cunningham has great play recognition and is tough in the trenches. He is not much of an impact tackler but is instead absorbent with his style and while he will not turn as many heads as Troy Polamalu, he makes safe, reliable tackles that stop the forces of even the best running backs. What he lacks in size, he makes up in speed, athleticism and excellent work ethic. He will continue to be a great weapon for Bill Belichick this season.

Drafted last April, Ras-I Dowling may have been the steal of the draft. Had his senior year not been hampered with injury, he would have easily been a top 15 player in this year’s draft pool. In Virginia, Dowling made a name early recording 44 tackles and two picks in only 12 games as a freshmen. He continued to be a shutdown corner for the cavaliers until his senior year where he battled multiple leg injuries and was limited to only five games.

Dowling is bigger (6’1” 198lbs) and faster (4.40 40 yard dash, 7th among all DBs) than most DBs. His strength is also impressive, putting up 10 reps on the bench press, which was good for tenth at his position. Look for Devin McCourty, Leigh Bodden and Ras-I Dowling to become one of the best Defensive Back trios in the NFL, injury permitting.

It is hard to harness my excitement for this player. Shane Vereen has the tools and skill set to be a break out performer right out of the gate. Vereen is a route-running halfback who forces the attention of the defense. At 5’10” 203 lbs, he is a thick, compact running back who runs strong with a low center of gravity. Vereen performed well at the combine running a 4.50 40-yard dash (8th in the combine for running backs) and a putting up a stunning 31 reps on the bench press (2nd in the combine among running backs). At Cal, he ran for 2,834 yards and 29 TDs in three seasons while adding 74 receptions for 674 yards and six scores.

Despite his uncanny eye for the endzone, Vereen’s hands are his best attribute. He shows soft hands that consistently make even the toughest catches look easy. The Patriots will likely line him up in the slot as well as the half back position. His hands and route-running ability will be a great asset at either position and will prove to be a big upgrade from Danny Woodhead last year. Look for Shane Vereen to be the Patriots new 3rd down back that boasts a striking resemblance to the once great Kevin Faulk.

3 thoughts on “Future Stars Of The Patriots?”