The dawn of a new season is the time every team is on the same level. For at least one week, each NFL squad is the same, 0-0, with a 16-game slate ahead and different challenges to overcome.

Every team that is, except the Dallas Cowboys, who should have an organization-wide screening of the movie “Groundhog Day” to open training camp each year. 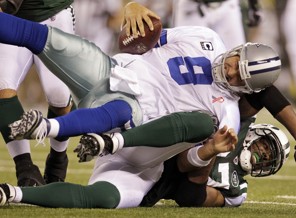 Why? Because no matter who they bring in, who they get rid of or what goes on with every other team, the Cowboys still have Jerry Jones in the big chair and Tony Romo under center.

For three quarters in their season opener at the Jets, the Cowboys looked awesome. They led 24-10 with 12 minutes left in the game and Romo, making his first start since Week 8 of last year, looked as good as he ever has. He was 17-of-23 for 296 yards and three TDs and Dallas looked poised to vanquish their hosts. Even Cris Collinsworth, the NBC analyst calling the game, said that the difference in the game up to that point was the smart, heady, mistake-free play of Romo.

But the game wasn’t yet over and as the pressure mounted, Romo did what he seems to always do in big spots – he crapped out. First, with the Cowboys lead cut to 24-17 but the ball on the Jets 2, Romo tried to dive through traffic toward the goal line with the ball free to be swatted from his outstretched arm. Guess what? It was, and the Jets recovered. All the Cowboys needed was a field goal and they likely ice the game. But that type of conventional thinking doesn’t fly with Tony Romo, particularly in big moments.

Not too much later, the Cowboys were victimized by a punt block returned for a TD with just over a minute left (how and why they allowed this to happen where and when it did is a whole other “What the hell is it with the Cowboys???” column altogether). Romo’s response was to throw the first pass of a potential game-winning drive into double coverage, his intended receiver less open than at least four Jets defenders. Naturally, the pass was picked off and the Jets won the game three plays later on last second field goal.

So Romo lost another high-stakes, winnable game due to the fact that he’s a knucklehead. What else is new? Not Cowboys owner/GM/coach/media relations head/broadcaster/concessionaire/valet/head cheerleader Jerry Jones shooting his mouth off in the aftermath. First, Jones discussed defensive back Orlando Scandrick’s leg injury with anyone who would listen, a trademark of his (we now know not only the exact nature of the injury and how long Scandrick will be out, but his entire family medical history including dental records). Then, he complained about receiver Dez Bryant being shaken up on a punt return, thereby completely undermining his head coach Jason Garrett and Garrett’s staff. If anyone who has ever even read an article about the Cowboys in the past 20 years is surprised by Jones’s behavior, you need to work on your reading comprehension skills.

The point is simple. Every team starts each season with a clean slate except for the Cowboys. Because, as has been noted in this space before, as long as Jones owns the team and subsequently conducts himself as he does, and as long as Romo is the quarterback and can’t learn to get out of his own way, Dallas will never win a thing. Same ol’, same ol’.

1. Green Bay: It took the defending champs exactly one quarter to look just as good as they did on their run to the title last winter. Aaron Rodgers threw three TD passes in the that opening frame, the first quarterback in league history to do that in the season opener, and went on to finish 27-of-35 for 312 yards in a 42-34, opening night win over the high-powered Saints.

2. Baltimore: The Ravens talk. A lot. And when they were woofing away leading up to their opener against Pittsburgh (particularly about how the Steelers have been mostly lucky in beating them six out of the past eight times), it felt pretty stale. Then, they went out and demolished their division rivals, 35-7, forcing seven turnovers on defense and rolling up 385 total yards (170 on the ground) against the vaunted Steeler D.

3. New England: The Pats offensive juggernaut lifted off on Monday night in Miami with 622 total yards (517 for Tom Brady) and 38 points. If Bill Belichick can somehow figure out how to get his defense even in the same galaxy as the offense, there may be no stopping this team.

4. Chicago: It seems like everyone keeps saying the Bears aren’t that good but they just keep winning. They surprisingly hosted the NFC Championship last season then, maybe even more surprisingly, blew out supposed Super Bowl contender Atlanta on Sunday, storming out to a 30-6 lead after three quarters. The great Brian Urlacher led the Bears still excellent defense, full out diving to pick off a pass and scooping up a Julius Peppers forced fumble and running it back for a TD.

5. Philadelphia: The Eagles withstood an early Rams TD then blew the doors off, overwhelming host St. Louis in a 31-13 victory. Philly piled up 236 yards rushing on 32 carries (7.2 yards per attempt) including 122 on just 15 rushes for LeSean McCoy, and training camp holdout DeSean Jackson continued his case for a new deal with six catches for 102 yards and a score.

1. Kansas City: Easily the worst loss of the week. The Chiefs were rolled, 41-7, by the Bills and at home no less. Their quarterback Matt Cassel completed 22-of-36 passes but for only 119 yards, good for an abominable 3.3 yards per attempt, and the rest of the offense wasn’t much better with only 213 total yards and 13 first downs. On defense, KC made Bills quarterback Ryan Fitzpatrick look like Peyton Manning (17-of-25, 208 yards, four TDs) and lost star safety Eric Berry for the year with a torn ACL. Hideous.

2. Indianapolis: Speaking of Manning, has a player ever won an MVP award without playing a single game? The Colts waited until halftime to even get off the bus last week in Houston, falling behind 34-0 (their biggest halftime deficit in team history) en route to a 34-7 loss to the Texans. I’ve read a few items that suggest that the Colts “culture” will carry them to a respectable mark by the end of the year. If 4-12 is a respectable mark, those who think that way will be vindicated.

3. Seattle: Petesy Carroll watched his old Pac-10 nemesis Jim Harbaugh kick his ass in Harbaugh’s NFL coaching debut, a 33-17 loss to the 49ers. The Seahawks managed to allow 33 points despite giving up just 209 yards and then yesterday, Petesy said it might be a couple steps back for his team before it takes any big steps forward. Surely, Seattle fans rejoiced at that statement.

4. St. Louis: The Rams were one of the darlings of the pre-season thanks to a stronger than expected campaign last year in which they missed the playoffs by just one game and got a solid rookie season from QB Sam Bradford. Then the real games started, Bradford and five other Rams starters left with injuries and St. Louis got beat up by the Eagles. This team is still intriguing and in the weak NFC West, they could well go further than they did last year. But last Sunday, the Rams looked like they still had a long way to go.

5. Cleveland: More of the same for the Browns. A flurry of mistakes (11 penalties, two turnovers, guys pointing at each other on defense while unimpeded, fourth quarter TDs were scored right around them) cost Cleveland its home opener with the Browns blowing a fourth quarter lead to their in-state rivals the Bengals.

– Cam Newton, Panthers: Carolina lost its opener, 28-21 to Arizona, but the No. 1 overall pick was out of this world, 24-of-37 for 422 yards and two TDs (eight for 178 and both scores to Steve Smith). In doing so, he became the first quarterback in NFL history to pass for that many yards in his career debut.

– The Lions: Quarterback Matthew Stafford passed for 305 yards and three scores in Detroit’s 27-20 road win over Tampa Bay, but perhaps more importantly, he didn’t get hurt. Stafford hasn’t been able to stay on the field over the course of his first two years, missing 13 games last season after six in his rookie year. If he can stay healthy, expect the Lions to break their string of 10 straight losing seasons.

– Scott Chandler, Bills: Coming into Buffalo’s huge, 41-7 win at Kansas City, tight end Chandler had been released by four different teams and had one career reception. He then had five catches for 63 yards and two TDs. Definitely one of the coolest stories of Week 1.

– Donovan McNabb, Vikings: After Percy Harvin returned the opening kickoff against San Diego 103 yards for a TD, McNabb actually had to play the next time Minnesota got the ball. And when he did, he looked like all the talk of his being washed up has been completely justified. In his first game with the Vikings, McNabb stunk up the room, completing 7-of-15 passes for a whopping 39 yards in a 24-17 loss. Even BrettFavre is better than that. Yuck.

– Chris Johnson, Titans: Johnson played his first game since holding out for a massive new deal for nearly all of training camp and responded with 24 yards on nine carries, the third worst game of his career. He’ll be fine; he’s too good not to be. But man did he look ugly on Sunday

– The Steelers: The key word surrounding Pittsburgh after Sunday’s rout at the hands of Baltimore is old. Last year en route to the Super Bowl, the Steelers allowed just two opposing teams to run for 100 yards. They’ve now done it once in one game this season. The Ravens totaled 170 (107 for Ray Rice), the most yards on the ground given up by the Steelers in three years. There’s a long, long way to go. But look at the records of pretty much every Super Bowl runner-up over the last several years. Not good at all.

Injuries were a huge story in Week 1. It’s already been noted here what happened to the Rams against Philly, with their starting QB, running back, slot receiver, right tackle and No. 1 corner leaving the game. The Giants came into their Week 1 loss to the Redskins without their two starting defensive ends, a defensive tackle, two starting linebackers and three corners. The Bengals lost their starting QB, rookie Andy Dalton, in their win over Cleveland. Saints stud receiver Marques Colston is out 4-6 weeks with a broken collarbone. Panthers middle linebacker/defensive captain Jon Beason will miss the season with a torn Achilles. Pats center Dan Koppen broke his fibula and will miss two months. The Chargers lost their kicker Nate Kaeding for the year on the opening kickoff of their season. Berry is lost for the season for the Chiefs and of course, there’s Peyton Manning, who will not (or at least should not) play this year. And there were still more.

They’re always a huge part of the game but it still felt like there were a lot more injuries in Week 1, especially of the serious variety. It stands to reason that the lockout and the subsequent absence of team-sanctioned/supervised minicamps, workouts and training sessions may lead to more injuries than usual this season. We shall see.

One thought on “Around The League – Week 1”