Is it not enough that the Pats had to play one of the horrible football franchises from this state? They had to play both in one year?

Sure they may have had some success but at what cost? A hearty tsk tsk and what about the children to both of them.

Oh well, not everything from Pennsylvania is bad, just their evil football teams and Arlen Spector. The food and beer is good.

We already made Philly Cheese Steak in the past  (check it out, it’s good!) so let’s make some soft pretzels.

Pennsylvania produces 80% of the country’s pretzels. See! I told you not to judge PA by it’s football teams.

We’re going to make our own. Why? Because it’s easy but seems hard. Also you can make stuffed pretzels, and nothing is better than a stuffed pretzel. Unless it’s beating a team from Pennsylvania and then eating their pretzels.

This is baking, so it is important to be precise in your measurements, especially the flour.

You can do this by hand, but it’s much easier with a stand mixer and dough attachment. A hand mixer will not do the job. If you don’t have a stand mixer you’ll have to knead the dough.

Combine the water, sugar, yeast and table salt in the bowl of a stand mixer. Let it sit until the mixture begins to foam, 5-10 minutes. Melt the butter and add it and the flour mix on low speed until well combined.

Change to medium speed and mix until the dough pulls away from the side of the bowl, about 5 minutes. Remove the dough from the bowl, clean the bowl and then oil it with vegetable oil. Return the dough to the bowl, cover the dough with plastic wrap and sit in a warm place for an hour, the dough will double in size.

Fill a pot with a gallon of water, add the baking soda and bring to a boil.

Put the dough on a slightly oiled surface. Split into 8 pieces. Like a kid working with playdoh, roll out each piece of dough into a 2 foot rope. Make a U-shape with the rope, holding the ends of the rope, cross them over each other and press onto the bottom of the U in order to form the shape of a pretzel. Place onto the sheet pan.

One at a time place the pretzels into the boiling water for 45 seconds. A large spatula is useful for holding them under the water and removing.

As you remove each, return to the sheet pan and sprinkle with the pretzel salt. Again if you can’t get pretzel salt then kosher salt works

Bake to a dark golden brown in color, approximately 12 to 14 minutes. Cool for at least 5 minutes before serving.

I know you are all thinking… Excuse me, but you mentioned stuffed pretzels?

Yup, the only change happens at that “Split into 8 pieces” step. Cut each piece in two. So you have 16 foot long ropes.

Take each piece and roll out with a rolling pin. You’ll get them to about 1 feet by 6 inches wide. Spread a topping in the middle, leaving half an inch around all 4 sides.

Roll up the dough into a cigar shape and pinch down the ends and side. Crimp well as you’ll still be boiling them for 30 seconds.

Cook for about 4 minutes longer than above.

Anything you want really that won’t soak through. Make 16 different ones and eat them all yourself as the others cry.

The pretzels will last a few days, whether they have to be refrigerated or not depends on what you stuff them with. 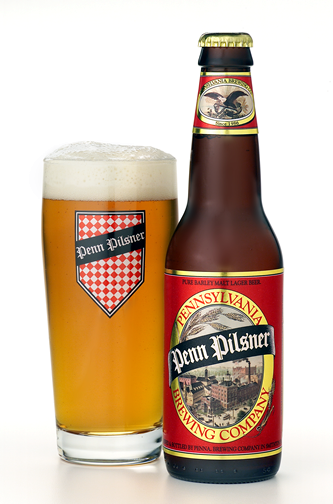 Penn Brewery finally started distributing to New England this year. Sure we already have tons of great beer, but Penn is a German style brewery as opposed to most craft brewers that follow Americanized versions of
English and Belgian traditions.

My favorite is the Penn Dark. A 5% ABV Munich Dunkel, this dark lager is a bit fuller in body than many lighter lagers. Some roast, toffee and earthy/herbal flavors.

Speaking of Octoberfest, Penn has two.The flagship is the oddly named Penn Pilsner. Odd because this is a Vienna Lager, a fairly rare style related to the Octoberfest. 5% ABV, malty with some caramel, a great food beer.

The seasonal Penn Octoberfest is mainly in the style of the modern German Fest beer, really just a larger Munich Helles than an Octoberfest. At 6% ABV this golden beer is stronger than the German examples however. I believe it’s strong enough to qualify as a stark (strong) beer instead of a Voll (full) beer which is the category Fest beers fall in Germany.

The better of their Octoberfests is the late Winter and Spring seasonal Marzen. 6% ABV like the Octoberfest, but this Amber beeris more like a bigger version of the Penn Pilsner. Far superior to their Octoberfest. This one will
show up in about a month.

Hopefully we’ll be getting the winter seasonal St Nikolaus Bock. Not much stronger than the two listed above at 6.5% ABV, but this Bock beer is much darker. Flavors of bread crusts and chocolate highlight this rich, chewy beer. No spices unlike too many other winter seasonals, just malty goodness.

On the lighter side Penn does make a German Pilsner called Kaiser Pils.

Light in body and color, very dry and hoppy.I don’t know if they stopped sending this one up here, I haven’t seen it after the first time their beers showed up.

Penn Gold is their lightest beer. 4% in the Munich Helles style. Helles meaning clear or bright. If you haven’t had a Helles, they’re comparable to a softer, less hoppy Pilsner.

Penn Weizen is a year round beer but hasn’t shown up yet. I’m holding out hope it will be a summer seasonal for this market. The 5% ABV Hefeweizen is the best I’ve had from a US brewery. Not my favorite style, but if Penn Weizen was around the style would start climbing for me.

One thought on “Patriots Buffet Table – Patriots at Eagles”