If two evil entities had a fight – and let’s avoid the obvious pop culture reference here – who would win?

The answer is, of course: who cares?

Patriots fans faced such a dilemma Sunday when the Jets got permission from the Giants to use their stadium and host the Dolphins. What looked like a yawner tied 3-3 at the half turned into a 30-25 Miami win. On the positive side: the Jets loss puts them another game behind the Pats. On the negative: at some point the Patriots may have to kick to Miami’s Ted Ginn.

More on that below, along with some other notes from the “if-anyone-loses-then-the-Pats-win” contest…

When You Begin The Big Ginn: Miami drafted receiver/specialist Ginn in the first round. We laughed. After two (yes, two) kickoff returns for touchdowns, we can think of one team that isn’t laughing. On his second return (101 yards), Ginn stopped at the 20, took a step backward to avoid a tackle and slithered to his right to find the sideline, zipping past all Jets defenders. Take a look for yourself.

Ricky Tick The Tempo: A few years ago, Miami running back Ricky Williams seemed about as interested in playing football as an agoraphobic in a comfy bed. Well, someone put some caffeine in his herbal tea. Williams had 27 yards on eight rushes and 41 yards on two receptions. Doesn’t sound so great, but considering his team had 104 net yards on offense, Williams’ 68 made him the big dog. Or dolphin. 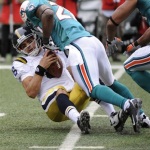 Mark, My Word: Jets rookie QB Mark Sanchez had a pretty strong stat line (20 of 35 passing, 265 yards, two TDs), even running for a score on a bootleg that would have made Steve Grogan proud. Compared to Miami’s Chad Henne (12 of 21, 112 yards, one TD), Sanchez looked nearly immortal. Both of his TD passes came in the second half when it appeared as though New York could overcome Miami’s offense-less heroics. His pass to Dustin Keller in the final minutes converted a fourth-and-10 to keep the Jets alive. On the flip side, the QB’s last two plays were a 7-yard sack and an overthrow of the end zone.

So goes the up-and-down life of a rookie.

Mr. Jones: That, believe it or not, is a reference to a song by post-punk gods the Psychedelic Furs about searching beyond the mundanity of everyday life (see, kids, back in the 1980s music really meant something). Jets halfback Thomas Jones compiled 102 yards on 27 rushes, helping his team win the time of possession battle, 34 minutes to 26.

Too bad time of possession only matters when you do something with it. Just ask Ginn.