Yes, FOX is trotting out Farve-Cam this weekend.The network is isolating one camera that will be on Brett Favre for the entire broadcast on Sunday.

There are three games that will be of interest this weekend, two of which feature Patriots AFC rivals and could determine playoff berths and/or seeding. The 6-0 Denver Broncos travel to Baltimore to take on the Ravens at 1:00pm, this should be another good test for the Broncos. But the biggest game to Patriots fans is the AFC East matchup of the New York Jets and Miami Dolphins. Both teams have done plenty of talking this week. The Dolphins sit at 2-4, but are 2-0 in the AFC East. A victory over the Jets would mean a season sweep for the Dolphins, and a 3-0 division record. The Jets sit at 4-3, but 1-2 in the division. A win for them would tie the Patriots in the win column, and even their division record. Since the Patriots have two games remaining with the Dolphins, I’m thinking we root for Miami, since the Patriots can still control their AFC East destiny because they have both games still remaining against the Dolphins.

Here are some thoughts from Phil Simms on Dolphins/Jets: 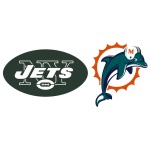 (On Miami vs. N.Y. Jets): The thing about the Jets and the Dolphins, there’s always been a rivalry but it’s really stepping up.  Rex Ryan is making sure to step it up at a faster pace than these rivalries are used to. It makes for good preparation during the week.  It’s getting close to desperation game time for the Miami Dolphins.  One, because of the number of losses, if they did lose; and two, because it’s a division game.  This time of year it’s getting to that stage of the season where if you lose, it’s hard to make it back up with the season almost half over.

(On Miami’s Chad Henne): The big thing with Chad Henne is that many people don’t even recognize his name.  I have been impressed with him. He’s played very well.  He’s very talented, and he absolutely has a chance to be in the same class as Matt Ryan and Joe Flacco.  But you can’t tell anybody that because he’s just not a big enough name.  He wasn’t ballyhooed on draft day.  He probably deserved to be a first round draft pick, but was not.

(On Jets’ Rookie Shonn Greene): I liked Shonn Greene a lot coming out of college, and I thought that when the Jets moved up in the draft to get him it was a great move on their part.  I think there were quite a few NFL teams that were sitting back and shaking their heads because they were mad they didn’t make the move to go up and get Shonn Greene.

(On Brett Favre and Minnesota at Green Bay): I think Brett Favre will get a great reception in Green Bay.  But between the players and the coaches of the organization, there’s extra.  I don’t want to say motivation, but there comes a time when you just say okay we’ve had enough. And that’s why I think Green Bay will find a way to win the game.

In this week’s FOX  NFL Sunday show, Bradshaw, an outspoken critic on the way Favre handled the off-season and his ultimately signing with the Vikings, sits down with the legendary quarterback to discuss his mindset and emotions upon his returning to Lambeau Field in a rival’s uniform. Also, Long finds out what the Packers can do to prevent Vikings DE Jared Allen from causing as much damage as he did in their earlier matchup.

The Favre-return-to-Green-Bay is sure to be the most overblown sports story of decade. These promos from FOX should give you some idea of what to expect Sunday.

FAVRE-CAM LETS FANS FOLLOW EVERY MOVE NO. 4 MAKES ON FOXSPORTS.COM & NFL.COM — With all the hype surrounding Brett Favre’s return to the place he called home for so many years, it’s fair to assume fans attending the game will have their eyes glued on him from the moment he runs out of the visitor’s locker room and takes the field for warm ups to the last second of this highly anticipated ‘homecoming.’ FOX Sports gives fans watching at home the same opportunity. A camera stationed high on the 50-yard line will be isolated on Favre from the second he takes the field against his former team until the moment he runs back into the locker room. A constant video stream of this select angle is available to fans by logging on FOXSports.com and NFL.com.

HALL OF FAME QB AIKMAN PREVIEWS EPIC SHOWDOWN IN GREEN BAY — In the most anticipated matchup on any network this season, Vikings quarterback Brett Favre leads Minnesota into his former home, Lambeau Field, as the Vikings take on quarterback Aaron Rodgers and the Green Bay Packers.  Hall of Fame quarterback and NFL on FOX lead analyst Troy Aikman shared his thoughts below.  Aikman, along with play-by-play broadcaster Thom Brennaman and sideline reporter Pam Oliver call all the action LIVE this Sunday, Nov. 1 (1:15 PM PT/ 4:15 PM ET LIVE) on FOX.

AIKMAN ON FAVRE’S PERFORMANCE THIS SEASON, AT THE AGE OF 40 — “The thing that is most impressive is not that he’s played at such a high level, it’s that he’s been able to come back week after week and continue to play. We tend to take it for granted with him now because he hasn’t missed a game. We have to remind ourselves that he’s 40 years old!  When I retired at age 34, it was hard to come back after a physical game during my last season and be prepared the following week to play physically. You’re just so sore and it started taking longer and longer to recover.  Now he’s six years older than what I was and yet he’s still coming back and is able to play and fight through a lot of things. To me, that’s the most impressive part.”

AIKMAN ON MINNESOTA SUSTAINING THEIR SUCCESS THUS FAR — “They have so many great pieces in place. The important thing for them is staying healthy. Minnesota went Pittsburgh and could’ve won.  They went toe-to-toe with them and beat a good Baltimore team. They’ve played some good teams and have found ways to win.”

AIKMAN ON AARON RODGERS FILLING FAVRE’S SHOES IN GREEN BAY — “The most comparable situation to what Aaron is going through would be Steve Young’s start in San Francisco. He was replacing Joe Montana yet Joe was still playing. That’s the hard part. It was going to be hard for anybody if Brett had just retired and you’re going to be compared to him. But then to be compared to him while the guy is still playing and playing at a high level, I can’t even imagine what that would be like. I’ve been very impressed with how Rodgers has handled it.  I’ve been impressed both publicly as well as privately. I have the opportunity to visit with these guys privately and I will tell you that he’s been as classy in my conversations with him as he has been publicly.  I’m sure it hasn’t been easy for that entire organization or Aaron.  I think Aaron has handled it unbelievably well.  Fortunately for him, he’s played well.”

AIKMAN ON FAVRE SETTING FOOT IN LAMBEAU AS A VISITOR — “The first time these two teams played he talked about how nervous he was. I’m sure that experience was very emotional but different because of where that game was played. This will bring about a different set of emotions. On the other side, I think there will be a level of comfort for him because it is a place he is so familiar with. Granted he’ll be playing against his former team but he’s done that. The strange thing will be that he’s going to be dressing in the visitors’ locker room. My guess is that, he’ll without even thinking about it, walk into the Packers’ locker room because that’s what he did for all of those years. It’ll be different for him viewing the game from a different sideline than he stood on for all of those years. I think it will be a much more emotional experience for him than anything he experienced on Monday night in Minneapolis.”