#1 Tom Brady – There is nothing new or novel I could write about TB12 that hasn’t been covered by every sportswriter in the country.  This team goes as far as Tom Brady can take them.  That has not always been the case. During their Super Bowl appearances from 2001 thru 2007, Brady’s phenomenal play was offset by a professional, intelligent play-making defense. It’s easy to forget Brady throwing an interception in the end zone in the 2003 AFC Championship game against the Colts and later in the 2003 Super Bowl against the Panthers.  In both cases, the defense did enough to cancel out those key turnovers.  Today those mistakes would cripple this team.  Last year against the Jets, Brady threw a pick on the first drive and Alge Crumpler dropped a sure touchdown pass on the second drive.   Those two miscues lost the game because the defense was unable to make stops when they needed it.  The next five weeks are really going to clarify the picture with this Patriots team.  They play three very good teams on the road, (Steelers, Jets, Eagles), a good Giants team at home and an improving Kansas City team who let’s just say, knows this offense.  If the Patriots come out of the next five games at 3-2 they are looking strong at 8-3, with some very winnable games down the stretch.  The number one or two seed will most likely be in their grasp, but Brady will have to play similar to his 2010 form, with low turnovers and an offense that can score 30 every week.

#2 Jerod Mayo – This is a big season for Mayo.  He’s coming off an All-Pro year in which he led the league in tackles.  He was supposed to be the anchor on a new attacking 4-3 defense.  He is coming close to the end of his rookie contract.   Given all that, my question still, is this, who is Jerod Mayo?  He’s not Ray Lewis, he’s not Patrick Willis, and he’s not Brian Urlacher.  He has yet to prove he is the type of playmaker on defense that teams game plan against. Actually, the player he most reminds me of is Pepper Johnson, a solid middle linebacker who always did his job, but was never known for being a big play linebacker.  That worked well for Pepper, but he had Carl Banks and Lawrence Taylor alongside him.  Mayo has Rob Ninkovich and Brandon Spikes.  What the Patriots really need is another Tedy Bruschi. They don’t need a guy who just makes tackles. They need a linebacker who can change a game. Just off the top of my head I can think of three Bruschi’s interceptions that won games. There was a 4th quarter pick of Donovan McNabb in the Super Bowl, one against Detroit on Thanksgiving for a touchdown and of course, who can forget his interception against the Dolphins in a 12-0 win that led to an explosion of fireworks made from fallen snow. There were also two plays in the divisional round in 2004 against the Colts, where he ripped the ball out of Dominic Rhodes’ arms and later pounced on a Reggie Wayne fumble. Mayo doesn’t have any of these type of plays on his resume.  He’s injured his MCL for the 2nd time in four years. He’s going to have come back stronger from this injury than he did in 2009, and the Patriots will need him to be a presence on the defense. 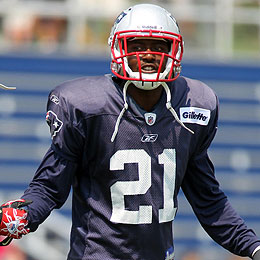 #3 Ras-I Dowling – Ras-I Dowling? The guy who has played in two games?  He’s been a complete non-factor all season, and that’s why I list him. Dowling can impact a secondary that has really struggled the past 3 seasons. Inconsistency has forced the Patriots to play a lot of zone coverage and give up a ton of yards. Belichick looked at the 2011 draft class and declared it to have as much depth at defensive line as any draft in recent memory. The Patriots had 3 picks in the first 33. There was no doubt going into the draft the needs were offensive and defensive line. The team was in dire need of a pass rusher. Belichick for reasons we’ll never know, chose not to move up for studs like JJ Watt, Nick Fairley and Ryan Kerrigan. He drafted Nate Solder at #17 and that pick, with the injury to Sebastian Vollmer, has looked good so far.

Could the Patriots have traded up and drafted an impact defensive lineman and then backfilled Solder’s spot later? That answer would most likely be yes. Instead they have a tackle that could be a major component of this offensive line for the next 5 years, minimum. It was a solid selection.

Then with the Patriots #28 selection, Belichick decided he didn’t like the value on the board for that spot. So he traded it to New Orleans for their #1 pick next year and the 2011 #56 overall selection.  The Patriots drafted Shane Vereen out of California with that pick. If you’re not familiar with him, it’s because he hasn’t really played all season. He hurt his hamstring in camp, and has been inactive in most weeks. He seems to be a redundant player behind Danny Woodhead and maybe Kevin Faulk.

So with the first pick in the second round the Patriots selected Ras-I Dowling. Dowling has the physique, the tools and the skill to be a top corner in the NFL.  Unfortunately, he has never proven that he can stay healthy and that trend continues to follow him into his rookie season. Belichick could have drafted defensive lineman Jabaal Sheard or outside linebacker Brooks Reed. Both are making an impact as rookies with Cleveland and Houston this season.  Belichick, however, felt another shut down corner alongside Devin McCourty was necessary. I can’t argue with that logic in what has become a passing league. I do question Belichick ignoring Dowling’s medical history.  This wasn’t picking Marcus Cannon in the 5th round despite a non-Hodgkins lymphoma diagnosis or Brandon Tate in the 3rd round coming off an ACL tear to run back kicks. This essentially was a first round pick for the Patriots, and they needed to hit on it.

Dowling’s injury history dates back to high school. He’s had hamstring, ankle, knee and now hip problems in his young football career. Hip injuries are NEVER a good sign at the pro level regardless of position. He only played in 5 of Virginia’s games last year. This year he has one preseason and two regular season games under his belt. Coming off a bye week where Dowling had ample time to rest, he STILL is not able to fully practice. He’s basically been hurt most of August, September and October. This is not good news for the Patriots who need him desperately.

If the Patriots plan on playing in the Super Bowl in Indianapolis in February they are going to need this defense to improve as the season goes on.   Dowling offers the most potential;  a big bodied defensive back who can not only play shut down corner but can help out as a Free Safety for a group who lacks play makers.

Belichick chose not to spend big on free agents.  He decided against a young defensive lineman.  He dictated the defensive backfield as an area that needed the most improvement.    If Dowling cannot offer help then the Patriots are depending heavily on average Safeties, an oft-injured Corner in Leigh Bodden, a hard-working but limited Kyle Arrington, and Devin McCourty, who thus far has been in a severe sophomore slump.

Last year despite a 14-2 record the Pats couldn’t get past the Jets. This season, without help, nothing will change. For most of us, it’s more than getting to the playoffs, it about winning it all and Aaron Rodgers or Drew Brees will be there waiting.  The Patriots are going to need slow down these offenses. Dowling is going to have to get out of the trainer’s room and start to contribute.