Our Halloween version of College Scout features some verrrrry scary teams in UNLV (eeeek!) and Washington State (Ahhhhhhh!) Perhaps fans of those teams will be justified in wearing masks today, but given their recent history its probably not that out of the ordinary. Trick or treat, here comes one day and one night game for you to scout:

(4:00 PM EST Versus): TCU comes in undefeated and ranked as high in the country as 6. They understandably have their eyes set on a BCS berth and looking at their schedule, there does not appear to many chances they’ll lose a game this year. They’re not just a product of a weak conference either, there is plenty of NFL-caliber talent on the roster. UNLV comes in struggling at 3-5, though they lost some close ones. They’ll be looking to put a hole in TCU’s grand plans after being blown out by 30 by them last year. 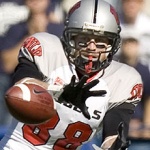 (#88): Wolfe is a solidly built, strong 6’2″ 210 lb. receiver who plays inside and is somewhat like a poor man’s Michael Crabtree. Wolfe is already UNLV’s all-time leading receiver. Last year he topped 1,040 yards and this year he already has over 650 just 8 games thru the season. Wolfe appears to be a perfect inside slot receiver who can settle into openings into zones and is not afraid to take a hit while utilizing his excellent hands. A move-the-chains type receiver who does not get deep down field but is tough and physical and can take a pounding inside. Also runs great routes. Played linebacker in high school, showing his toughness. Smart player who already graduated and is currently pursuing his Master’s. Would fit with Patriots due to their utilization of this type of inside slot receiver. Will need to play special teams at least early in his career.

UNLV LB Jason Beauchamp
(#33): Beauchamp is as good an athlete as a linebacker as you will find in college football today. A fast but well-built hitter, Beauchamp’s thunderous hits cause disruption repeatedly for opponents when he is on his game. Last year, Beauchamp rang up 127 tackles including 4 for losses and 2 sacks. Already has 5.5 sacks this year despite being slowed a bit with nagging injuries early in the year. Does show some blitz potential, but his real value could be as a coverage linebacker given his excellent athletic ability, which includes natural talent to get out and cover backs and tight ends effectively.

TCU RB Joseph Turner
(#24): Nice sized back from a program that has produced some good running backs. Checks in at 6’1″ 225 lbs. Has platooned a lot during career and never put up dominant numbers, but there is talent there. Has nearly 1,800 career rushing yards as of this writing. Good short yardage back who’ll fight for the tough yard or endzone. Has 8 touchdowns alone this year and had 11 last year. Has shown little pass catching ability so far in his career and TCU runs a pretty basic offense. He’ll need to show he can adapt to an NFL offense and that might keep him off the field from regular duty early in his career. A late-round back with good size and average speed and power.

TCU OT Marshall Newhouse
(#70): A big left tackle who has started since his freshman year and consistently improved. Checks in at 317 lbs. At TCU, his pass blocking is not going to become that refined, so he’ll need to work on that but the natural NFL talent is there.May be more suited to the right side. A mid to late round pick right now.

TCU DE Jerry Hughes
(#98): Hughes is one of the best defensive players in college football currently. He was a running back in high school who was not highly recruited. A pass rushing specialist and a general, all-around pain in the you know what for offenses, Hughes led the nation in sacks last year with 15. He relies on both power and speed to do it. Along with his 15 sacks, he forced an amazing 6 fumbles last year and picked off 2 passes. This year he is doing much of the same, with 9 sacks thru 7 games. It is just apparent college players can not block him. This is an ideal pick for the Patriots as he reportedly runs as low as 4.6/40, checks in at 257 lbs. and has the athletic ability to convert to outside linebacker. He even occasionally does some coverage responsibilities now. But getting to the QB and strip sacks are his specialty. As one opposing coach said “When he’s allowed to live in pass rushing mode, you’re better off drinking cyanide.”

(7:30 PM EST NBC): This game is being played in the Alamo Bowl and matches up the 5-2 Irish versus the seriously struggling 1-6 Cougars. Its unlikely this will be much of a game, though Clausen should build on his already impressive numbers.The best you can say about Washington State is they aren’t getting blown out quite as badly in games as they did last year. I guess that is progress. These teams have only met once before, in 2003 when Notre Dame won 29-26 in South Bend in overtime.

Notre Dame QB Jimmy Clausen
(#7): Clausen is the first Junior we’ve looked at this year. The quarterback for the Fighting Irish, Clausen came to college football as one of the most hyped high school players in recent memory. And Freshman year, he just wasn’t ready. Looking skinny and frail and with his arm not fully developed strength-wise, he had a poor freshman campaign and was repeatedly pulled or making mental mistakes. As a Sophomore, Clausen made remarkable strides. He finally looked bigger and stronger and the arm strength became better. He made better decisions, albeit with an occasional force still or dumb attempt to do too much. This year Clausen’s progress continues and he is the real deal. He has risen to the among the top quarterbacks in college football and a very good NFL prospect. More than any other QB in college football, he looks the most NFL ready right now, despite being only a Junior. He makes some phenomenal throws and is essentially running an NFL offense. It says here, however, he’d be better off staying for his last year. He does still make an occasional mental mistake, but there is no reason to think his progress wouldn’t continue into his senior year. Even with that, he’s only thrown 2 INTs thru 7 games this year. The Irish have rebounded to 5-2 from a 3-9 campaign last year. Another year and they may become a Top 10 team again behind the Clausen. They’re young. Another year and Clausen would have the opportunity to receive NFL coaching before actually in the NFL and a chance to work with a set of some of the best wide receivers ever put together on one college team, NFL prospects and underclassmen all. If he waits a year, Clausen could go from a top 15 pick to the top pick overall. And possibly finally have the great college season, team-wise, I’m sure he wants to have.

Notre Dame S Kyle McCarthy
(#28): A ball-hawking free safety with 5 interceptions playing centerfield for the Irish. He is active in the run game as well, racking up 110 tackles to lead UND last year. McCarthy plays hard, has decent size and can certainly play in the NFL. Has always been a top-notch special teams player as well. Solid all-around player who is not a great athlete, but a good one and is smart and a leader on defense. He’ll be a mid to late round pick by some team and probably a strong special teams presence. Kyle currently has a younger brother, Dan, on the Irish who is also a safety and receives some playing time.

Washington State C Kenny Alfred
(#69): A solid, 300 lb. anchor in the middle of the line for the Cougars and a player who’ll receive some All Pac-10 consideration. Was on the 3rd team for that award last year. Came out of high school pretty highly recruited and has started pretty regularly since freshman year. He is highly experienced in a high level conference, which is something the Patriots like to see. Smart and calls a lot of the signals on the WSU line. May be slightly undersized. Possible late-round pick who’ll certainly be in some NFL camp next year.

Washington State LB Andy Mattingly
(#45): A good-sized linebacker at 6’4″ 255 lbs. who was very experienced but had only started 10 games thru his first 3 years. Is now regularly starting this year and playing pretty well. Has 33 tackles, including 2.5 for losses and an interception. Big guy who is fairly fast, but a little bit sluggish in space. More of a run-plugger. Could get lost on a terrible team here, but there is some talent and worth looking into. Probably more of undrafted free agent, unless he works out very well before the draft. But there is size, talent and production that could translate to the NFL. Showed some pass rush ability with 8 sacks as a Sophomore, though that was a different scheme than he plays now. Needs to show some special teams ability to make a team or practice squad.